Introducing Summit In A Box 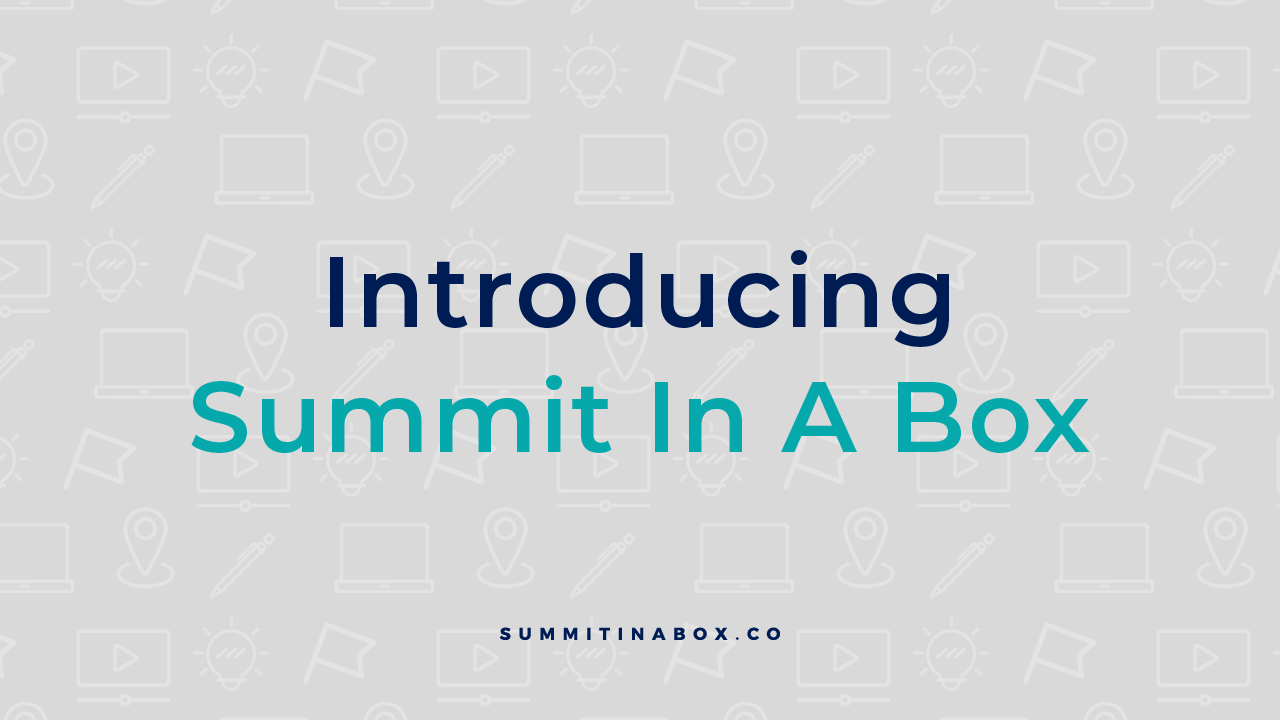 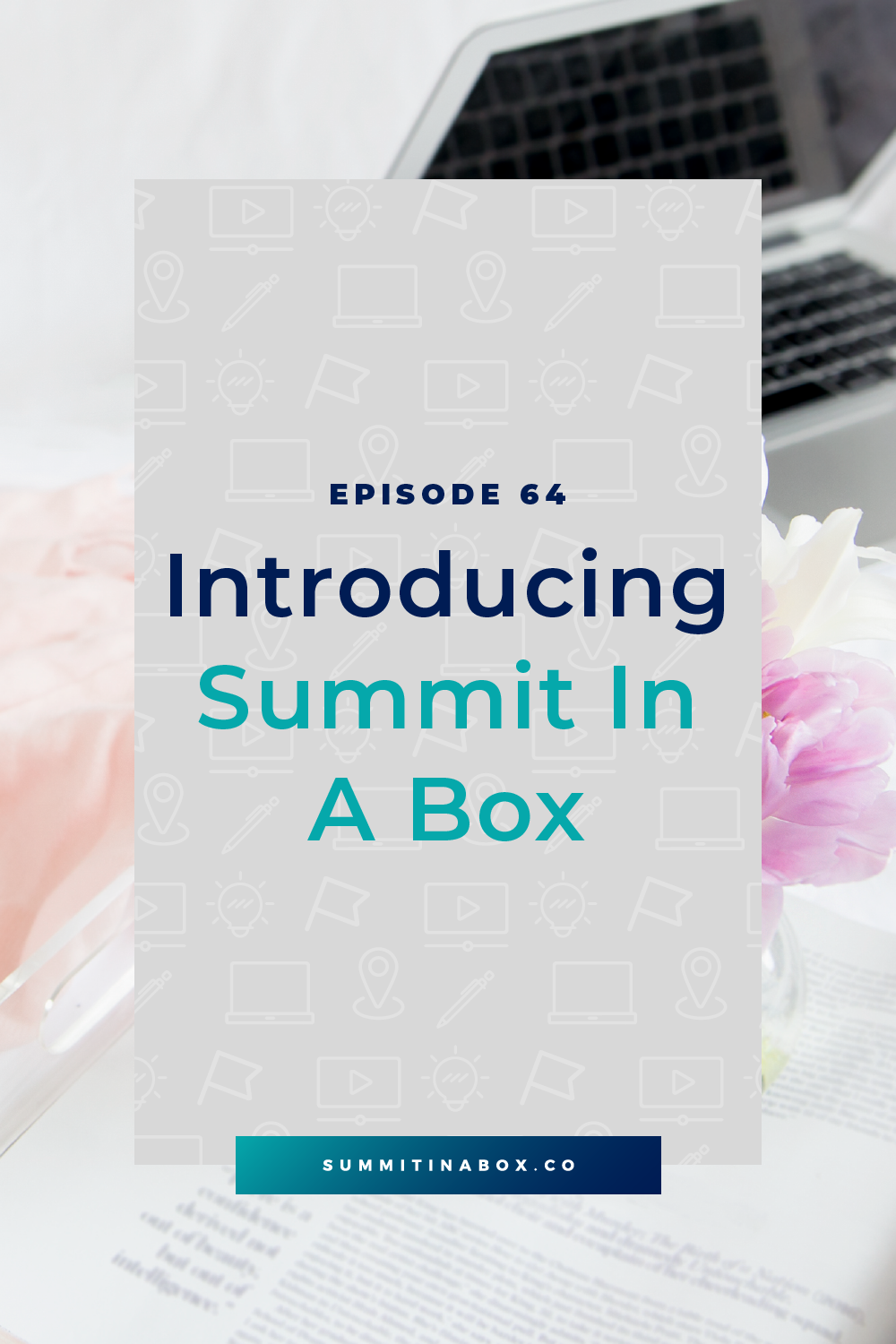 My signature Summit In A Box® program is finally here! It’s every training, template, and resource you need to host a summit with ease.

But I want to take it back a step and tell you where this idea came from and then share a bit more about the program.

This is something that's been in the works for over a year, really since this brand started in November of 2018, and I am so happy to finally record this episode.

Where the idea came from

I want to take it back a step and tell you a little bit about where this idea came from and to share more about the program for those of you interested.

The Summit In A Box® brand was not my idea. This idea started after the first summit I ever hosted in April of 2018. The summit went off great. Like I've told you guys before, I figured it all out for myself. Luckily it went off wonderfully.

After the summit was over, I had all kinds of people, speakers, and attendees emailing me asking, "Can you teach me how to do this?" To which my answer was no, that was a lot of work.

And two, they're mostly my speakers who were said, "This is the best summit I've ever been a part of. You should teach people how to do this." I also responded with, no, that was a lot of work, and that sounds like a lot of work. I'm happy with my business, and I'm not going to do that.

But as more and more people asked, I realized that I already had things that could make this process easier for people.

Like I had all of this stuff and once I stopped pushing the idea away, I realized that those things could be really helpful for people.

My other business was doing WordPress development. While I have a brain geared towards creating and using templates, I also have tech knowledge that a lot of people don't have, which is something else I realized could be so helpful. Think of all the website templates and page templates I could create for people with that knowledge.

And when I put those things together, the idea of Summit In A Box® is what I knew I needed to do. And not just Summit In A Box® as the brand name that you've known up to this point, but literally a virtual Summit In A Box® - everything someone would need to host a summit easily all bundled up into one program.

So I started this brand in, I think, November of 2018 with the goal to create that and instead, I got another product up so I could start making money right away while helping people. But then I got stuck.

I went and started thinking about this one day and realized how much it was going to take for me to make this product. There are literally hundreds of resources inside, no joke. These were all things that I knew I'd have to create and organize and perfect for other people to use and I just froze.

The idea sat on the back burner from the time I started in November until about May of the following year. And during that time I had slowly built a very small audience, but I had focused mostly on my WordPress development business instead.

After I hosted my third summit, it was like, okay, I need to do this thing now. Yeah. It was like I suddenly remembered what that initial goal was. And again, I was overwhelmed, but instead of running away like I did before, I started looking for a solution and my solution was to just start creating the resources on a regular basis and not feel like I needed to do it all at once.

Which, just like your summit, it would have been impossible. So that was my plan.

I made this huge list of hundreds of resources that I needed to create and my plan was to do three of these a month until they're done. At first, that's all it was. And then I thought that would be silly of me to be creating and saving all of those things when people could start using them right away.

And that's where the Summit Host Vault came from, which I know some of you listening are familiar with, some of you are in it.

This was a monthly membership where each month I released three new resources I created into this membership. It was really cool because it gave these summit hosts really great resources to make their summit easy. It encouraged me to continue making the resources.

I couldn't say, "Oh, I don't have time this month" or "I don't feel like it this month" because people paid me and expected on the 15th of every month I'm going to get three new bundles of resources and it also funded all the resources I was creating.

I'm paying a designer, I pay a copywriter, I had a lawyer come in and make a contract. It was funding all those things, and it was also like my beta test. I was able to use it to prove that these are things that people want. People want these templates and trainings and everything. I have to make their process easy.

So from June of 2019 to May of 2020 that's what we did. We got up to about 80 members I think over the last couple of days we've gotten over 80 as of recording this. Now it's closed. But it was so cool and it was so much more than I was expecting and people loved it.

By December 2019 I knew I had to pick up the pace because otherwise, we're never going to get this thing going. I dedicated about half of December and of January 2020 pumping out new resources and they weren't all being added to the Vault.

I added three new bundles per month and the rest I just saved and uploaded to this new product you're going to hear about today. But here we are, the Summit Host Vault is no longer, and today I have opened up the doors to my signature Summit In A Box® program.

Summit in a Box®

Summit In A Box® is the result of hundreds and hundreds of hours I spent planning my first summit and way more hours since, probably thousands, perfecting my process and streamlining my resources so you can use them and host a summit so much easier than I did that first time since I started hosting summits a few years ago.

I have brought in $100,000 into my business just from the summits alone with the process I created for myself. That doesn't count the money I brought in by being booked six months after each summit. That's just the income from the summit itself.

But I know that's not the case for so many summit hosts who plan their summits by themselves. If things might not go right, they might not make it through the process. And since I've had the chance to learn what works and what doesn't, I have streamlined those processes and created hundreds of resources for you.

However, unlike most summit resources out there that give you the strategies and then leave you kind of on your own to figure out how to implement them, Summit In A Box® gives you both the proven strategies plus copy templates, graphic templates, tech tutorials, marketing plans, resources for your speakers, and so much more - hundreds of resources to make your first online summit both easy and profitable.

As of our last count, we have:

And you'll be able to take the 400 or 500 hours and thousands of dollars on designers and copywriters that I have spent and create your own summit with a fraction of that.

You have everything you need inside of Summit In A Box®.

You'll also have the confidence knowing that all your hard work is going to pay off as these strategies have been proven by not only me, but all kinds of other hosts in so many different industries.

We also, along with how great Summit In A Box® is by itself, have some really great bonuses. There's a fast action that I'm not going to mention because I can't have people emailing after they hear about it and once it's too late and asking for it.

A couple of the other bonuses we have include:

My first summit tripled my email list, I had a conversion rate of 16% on that first one. I had booked up my services for six months, and I had brought in $16,000 which was about four times more than I normally made in a month at that time.

I want those results for you too in your very first summit.

Instead of saving money now and spending your time and other money later on, figuring it out and probably losing money in the end, if your strategies don't work, especially if you're spending thousands of dollars on designers, copywriters, consultants, you can get my exact process, swipe files, design templates, and more that will bring a return on your investment and help you streamline your first profitable and stress-free summit.