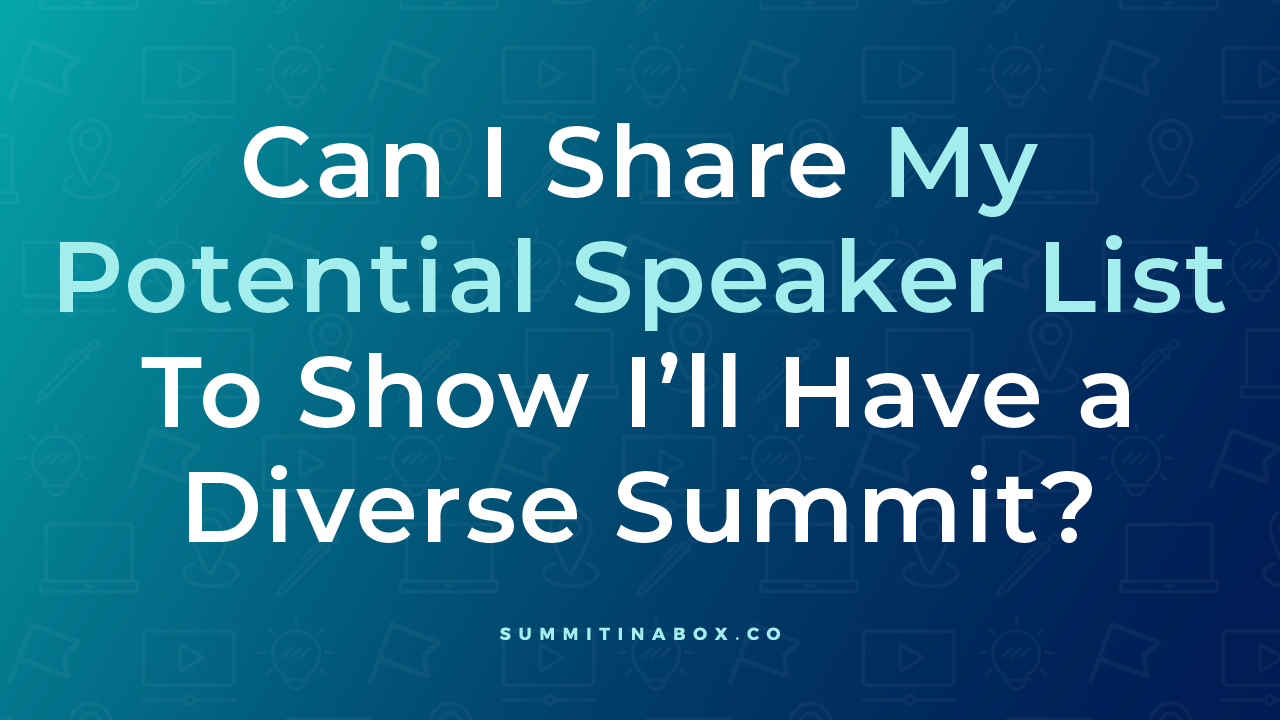 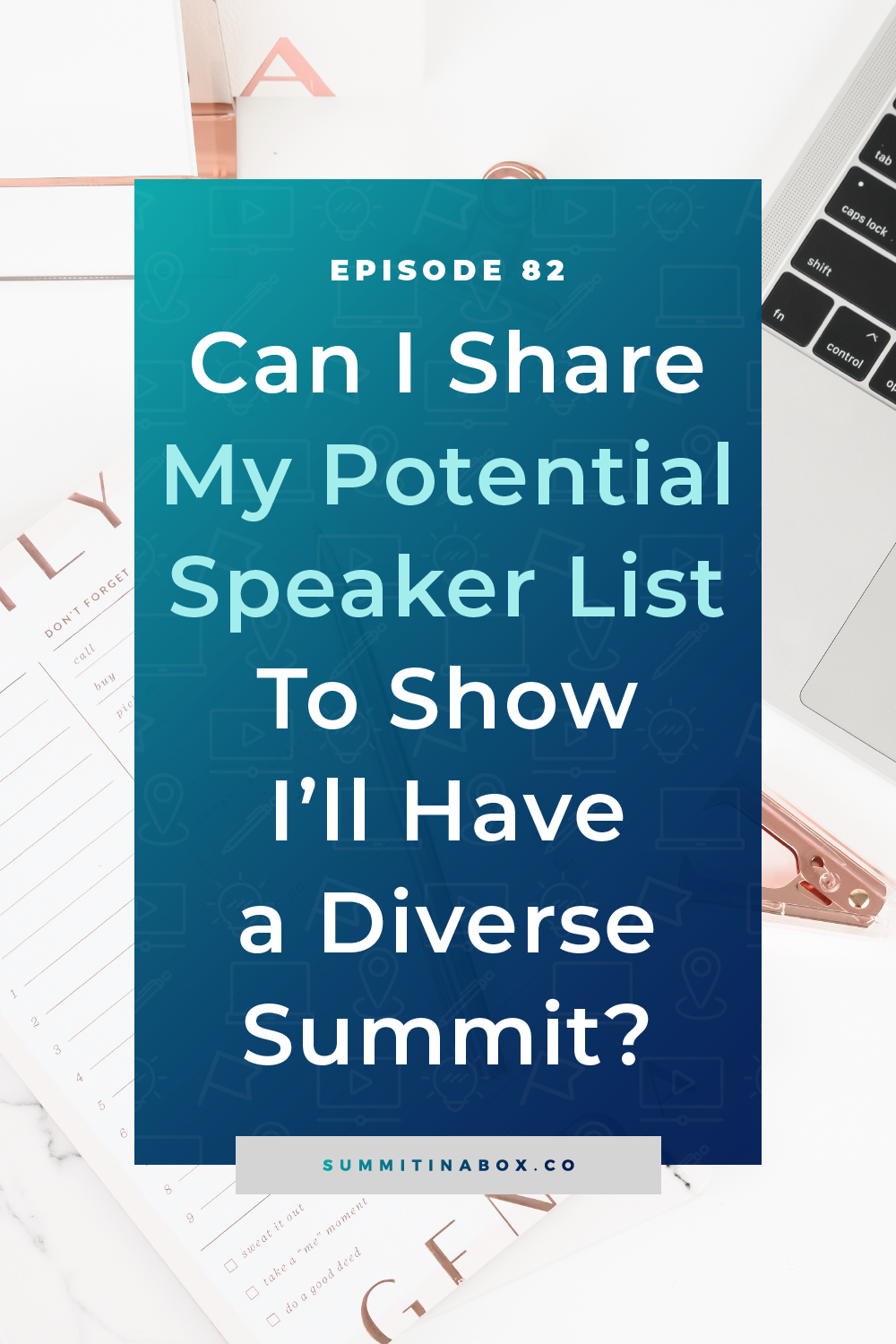 Have you been asked to share your speaker list, before it's final, to illustrate that you'll have a diverse and inclusive virtual summit? Is it even okay to do that?

Today, we'll break that down and cover:

Having a diverse speaker line up

It's becoming more and more common and encouraged for speakers to inquire about the diversity of your summit lineup before they agree to participate. (Note: Diverse can be in terms of race, gender identity, sexual orientation, age, abilities, etc.)

And honestly, if you haven't started doing the same, I recommend that you do! Why does it matter?

Check out my interview with Nicole Beiner way back in Episode 18 about how to host a diverse and inclusive virtual summit.

It's easy to get stuck in a cycle: You can't get a diverse speaker lineup because anyone that identifies differently than you wants to see proof that they won't be a token, that their audience will be well-represented, and that you're someone they want to associate with.

Without sharing an unconfirmed speaker lineup, you can't show them that you'll have a diverse event...and then you're stuck.

So...is it okay to share a lineup that isn't final? A lineup of people you haven't yet pitched or that you have pitched and haven't heard back from?

I polled my Instagram stories to get feedback, and 95% of people who voted said, "Yes!" they are totally fine with being shared on a speaker lineup before they're confirmed.

However, I did get a handful of people who said, "No", and I reached out to each of them to get feedback.

It turns out, everyone who said no said it for similar reasons.

They were worried about:

Overall, I was happy with these answers. People who didn't like the sound of unconfirmed speaker lists being shared basically just don't want people to be dishonest about it.

I clarified with each person if they'd be okay with it assuming it was a well-intentioned person and all of them changed their answer to "Yes!"

Being able to share your unconfirmed speaker list is helpful, but there's an even easier way to do it.

I recommend adding a note in your pitch, before you even have to worry about sending a speaker list, that you are dedicated to hosting an event that is diverse and inclusive.

Just put that out there, right upfront, so that people have that vibe from you going in. Of course, only do this if it is truly something that you value and will work for.

If you do end up needing to share an unconfirmed list of speakers, keep these "rules" in mind:

Overall, be honest, have good intentions, be a decent human, and you're going to do this the right way.

Give speakers an out

Last, give your potential speakers an out if they seem concerned.

Let them know who you're planning on pitching. Tell them that if your final lineup doesn't meet their standards that they are welcome to back out of participating.

You can even go as far as asking what their diversity requirements are, and including a clause in your speaker agreement that gives them that out.

My story asking a summit host for a speaker list

In June, when the anti-racism movement was starting, I got pitched for a summit. I asked for the speaker list for the first time after realizing how important it was to only support diverse events.

I took a look and was just floored at what I saw - while this movement was at its peak! The list of speakers they had confirmed was 10 white men and 1 white woman.

This was such a big wake up call for me! I felt uncomfortable because I would only be the second woman. I felt like I didn't belong and that I wasn't being represented. I felt like I was just being used as a woman to put on their registration page.

And I know those feelings were nothing compared to what a person of color would go through being pitched for the same summit!

Since I do know about the cycle that we talked about in the beginning of this episode, I asked about the diversity.

I asked where it was , if it was coming, who else they were reaching out to, and if it was important to them. They came back to me and said that they were actively working to add more women. Clearly I was not worried about gender diversity as much as racial diversity, in this case.

I was terrified to get on a call with the host to basically demand that he adds more diversity to his summit. To put it in perspective, I asked what he would feel like if he was interested in an event, went to the registration page, and it was all black women speaking. Would he feel welcome? I pointed out that the way he'd feel is similar to how a black woman would feel when checking out the registration page for his event. There was no proof that they were welcome.

It was a huge aha! moment for him. He instantly realized the importance of getting a racially diverse speaker lineup, and got to work improving it. In the end, he created a great event with a significantly wider range of speakers than he would have had originally.

I tell you this for two reasons.

If you need to start expanding your network to people who are different from you, regardless of what that looks like, take some action today to do that.

Maybe set aside some time on your calendar twice a week, to start looking for people different than you to be connecting with.

Who are some other people in your industry who don't look just like you?

Who may have different preferences than you that you can connect with and support? 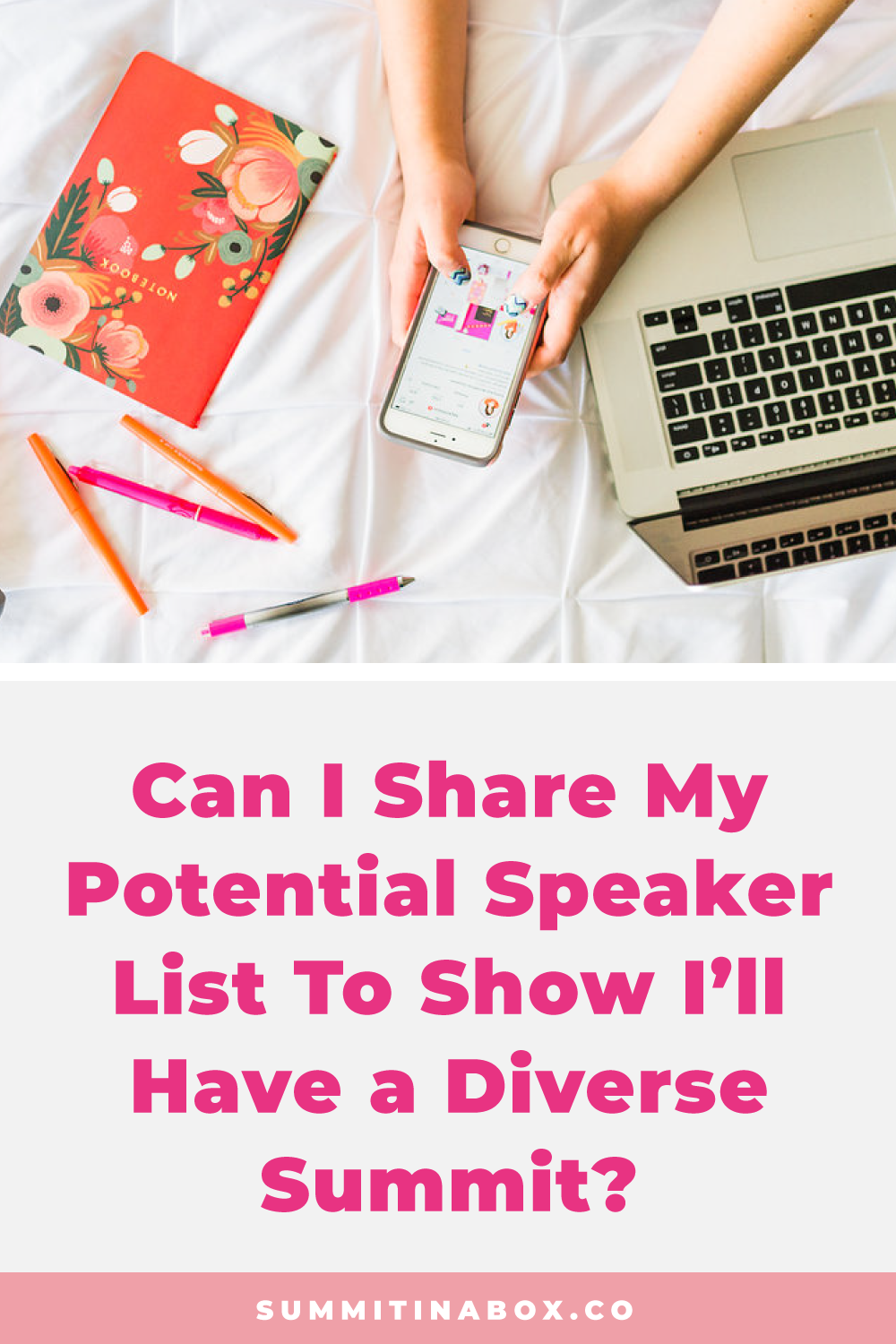