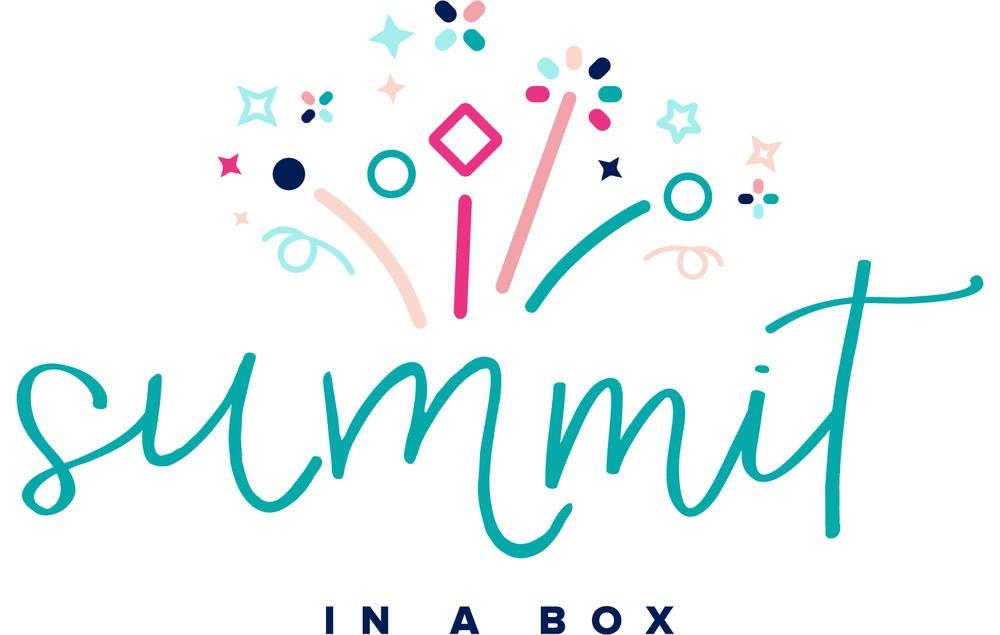 Calling Dibs on Your Virtual Summit Name with Joey Vitale 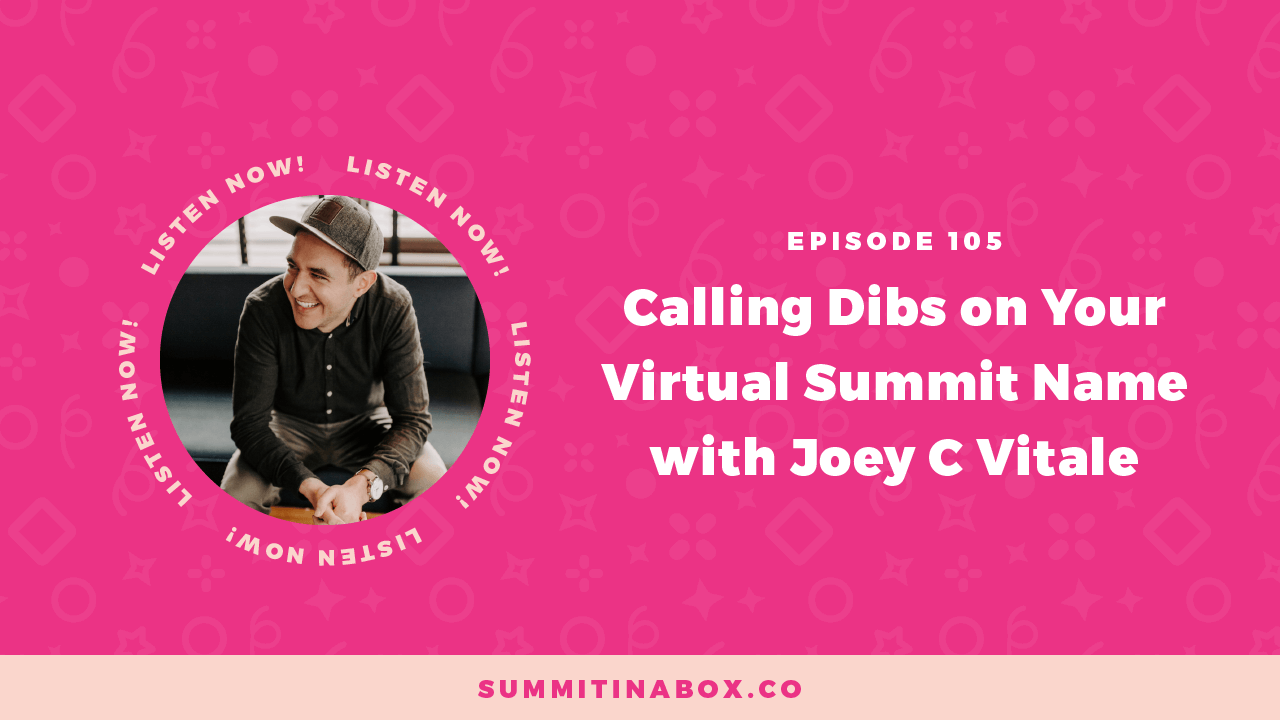 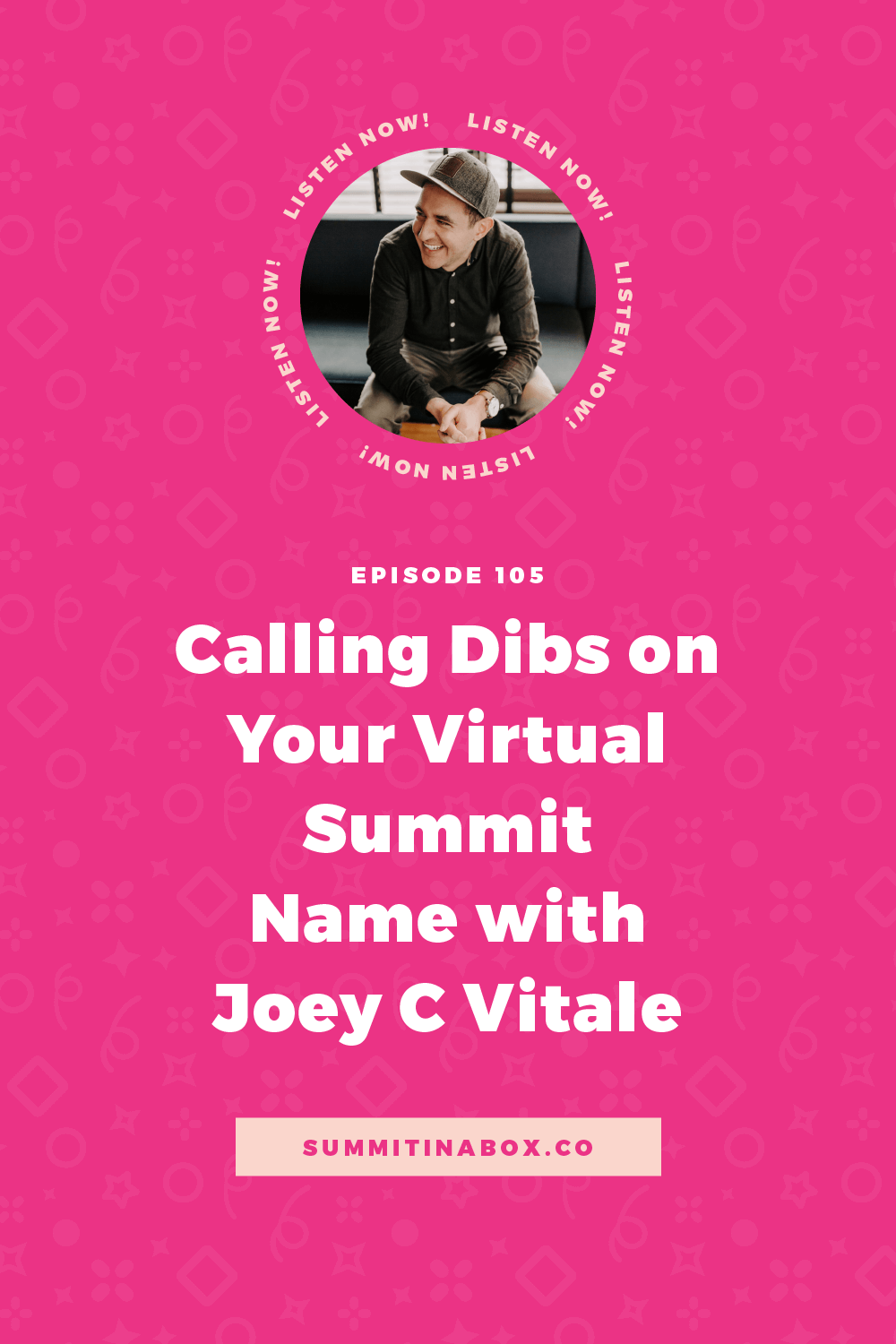 Naming your virtual summit shouldn't get checked off your list the moment you think of that *perfect* name.

If you don't follow this 3-step process from Joey Vitale to call dibs, you might not even be in a position to call that perfect name yours.

Today, you'll learn all about:

Whether you love it or hate it, the naming process takes time.

On top of the time it takes to think of something just right, there are all kinds of schools of thought when it comes to naming.

And once you come up with a name that feels right, there are still extra steps to take to make sure it's actually available. For example, you'll want to make sure the domain is available, check on social media handles, and make sure it's not trademarked.

Speaking of trademarks, a lot of people wait to decide whether they'll trademark until they've had the chance to test out their idea. The problem with that is if you wait to trademark until after you've committed to the name, you're on super thin ice that the name that you picked isn’t accidentally infringing on somebody else. (Which Krista has experience with - not fun!)

The Secret to Choosing a Virtual Summit Name

I've got a secret approach to choosing a name and calling dibs on it that I've perfected over the years.

This same process applies to your business name, your course, and your podcast, but I'm excited that we can talk about it specifically when it comes to your summit.

The secret itself is called my RAD method. Let's break down each step.

This is where it's important to get clear on what it means to get something trademarked or to file some type of trademark paperwork.

There are 2 different levels of trademarks.

The first level is automatic. That's what a lot of you have just by being in business and it's totally free.

The reason why you go to an attorney and the thing that you probably think about when you think of trademarks, is trademark registration. That's something that you can apply for at the federal level that allows you to claim the rights you already have.

How about an example to make that a little more clear?

Think of your business as a house that you built. When you build a business or a summit, you have the name. The business or summit itself is the house. It exists and it's yours, but it's not very, well-protected. It doesn't have a fence around it.

Building the house gives you those automatic trademark rights.

They're technically called common law trademark rights. That means that you only have exclusive rights in your geographic region, so bigger than a city, but much smaller than a state. This is helpful if you're a corner bakery, but not very helpful if you're an online business owner.

If you want to make sure that you have exclusive rights nationwide to your summit name, then you need that fence. That's where the trademark registration comes in place.

As a trademark lawyer, I know it's like an iceberg of laws when it comes to trademarks. When you try and Google this stuff, you get conflicting information. I went to law school, so you don't have to. You don't have to see the entire iceberg to move forward in your business with trademarks, you just have to understand the part of it that's above the surface.

Something else I want to point out is that not all names can be trademarked. But just because something isn't trademarkable doesn't necessarily mean that it's bad. You really just have to know what you're getting yourself into.

There's this fun wrinkle in trademark law called the Spectrum of Distinctiveness:

And just because a trademark is strong, doesn't mean you want it. Strong trademarks are very abstract, meaning when you see them, you really can't connect the dots unless you have awareness of the reputation of this business, to what it is that they do.

Kodak? Totally made-up word. Kajabi? I think it’s a totally made-up word. Dubsado? These names don't really mean anything, but they do because the business built a reputation around it. We see those more commonly in startups and apps. We don't see that as much in the online business space.

My favorite example of this is Jaguar.

If I were to say that I have a company called Jaguar, you might have not had any idea of what it is that I do. But as soon as I say, it's a car company, you already can understand, brand-wise, how it's going to feel. It's fast. It's high-end it's luxurious.

It takes some creative thinking here, but how can you come up with a name for your summit that takes a stand or shows what it is that you stay on, for really more of a Rocky Road name than like a vanilla.

A stands for aim

It's important to take some aim here and figure out what you can do to really try and hit the bullseye. If you just take the shot, you're probably not going to get it or you're going to get it, but it's not going to protect you the way that you think it should.

Unlike what we're used to with Facebook ads, when you put an ad up and they reject it, they reject it a day after you put it up. The trademark office waits 3-6 months before they tell you that they're going to reject it. You really want to be careful to do what you can proactively here so that you're confident and you're going to get to the bullseye.

There are two parts of the aiming process that you want to get right.

A lot of people want to skip the search. You can't skip the search because the biggest reason why trademark applications get denied is that there was already a trademark that was too similar, and it doesn't have to be the exact same, just similar to a similar audience.

You can go to uspto.gov, which is the US Trademark Office’s website with a free database. When you run a search on that site and review responses, the results you get are tricky.

Out of everything that I'm talking about, that's probably the biggest place where you'd want to get a lawyer involved, or at least have a lawyer guide you through the process.

Just as big of a problem is when people try and use Legal Zoom, it can turn into a really big garbage in, garbage out situation. If you don't know how to answer these questions, no one's going to tell you.

Showing Your Trademark in Use

Showing your trademark in use is another part of filing for a trademark. This is evidence that we have to attach, usually a website screenshot.

If you attach a screenshot, the screenshot has to show:

That can be really helpful if you haven't launched anything yet, but you want to do this the right way and make sure you have rights.

When we get to the D part, all of the hard work is done. You've already thought about the search and looked into it. Before you've really dug into the application part, you've thought about what you're going to say, what class to pick, everything. It becomes a lot more effortless to go through the process.

I like to say that it's like riding the wave of the work that you've already done, but I also can't stress that the D is the most important part.

I can't tell you how many business owners I've worked with that put a trademark on their to-do list. Maybe they run a search and see that the name is available, but they never get around to actually submitting their application. Then months later, years later, sometimes only weeks later, they recheck the trademark database, and someone filed with the same name before they got around to it.

It really is important to submit that application as quickly as you can, because until you get that trademark registration in place, you're walking a thin line that you might not actually own it.

Indie Law is a registered trademark that has an interesting journey of its own. We've been trying to secure that for over two years now and we got it. You know everybody and their grandma is trying to start a business right now, and there are only so many different names that we can come up with.

If you think of a name pretty easily, that you like, chances are that other people probably thought of that same name as well!

One of the biggest mistakes that we can be making is thinking I'll name my summit first and I'll trademark it later. The truth is that until you secure it as a trademark, the naming process isn't done. I think that in itself is something that is still so new to a lot of business owners. 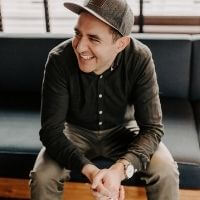 Joey C. Vitale is a lawyer, speaker, and business coach for online entrepreneurs and thought leaders. With his law firm and his courses, Joey helps online business owners call legal dibs on their brand name and signature methods so they never have to worry about losing their brand overnight. Joey has helped thousands of entrepreneurs and has spoken all over the country to help business owners stay safe and thriving. 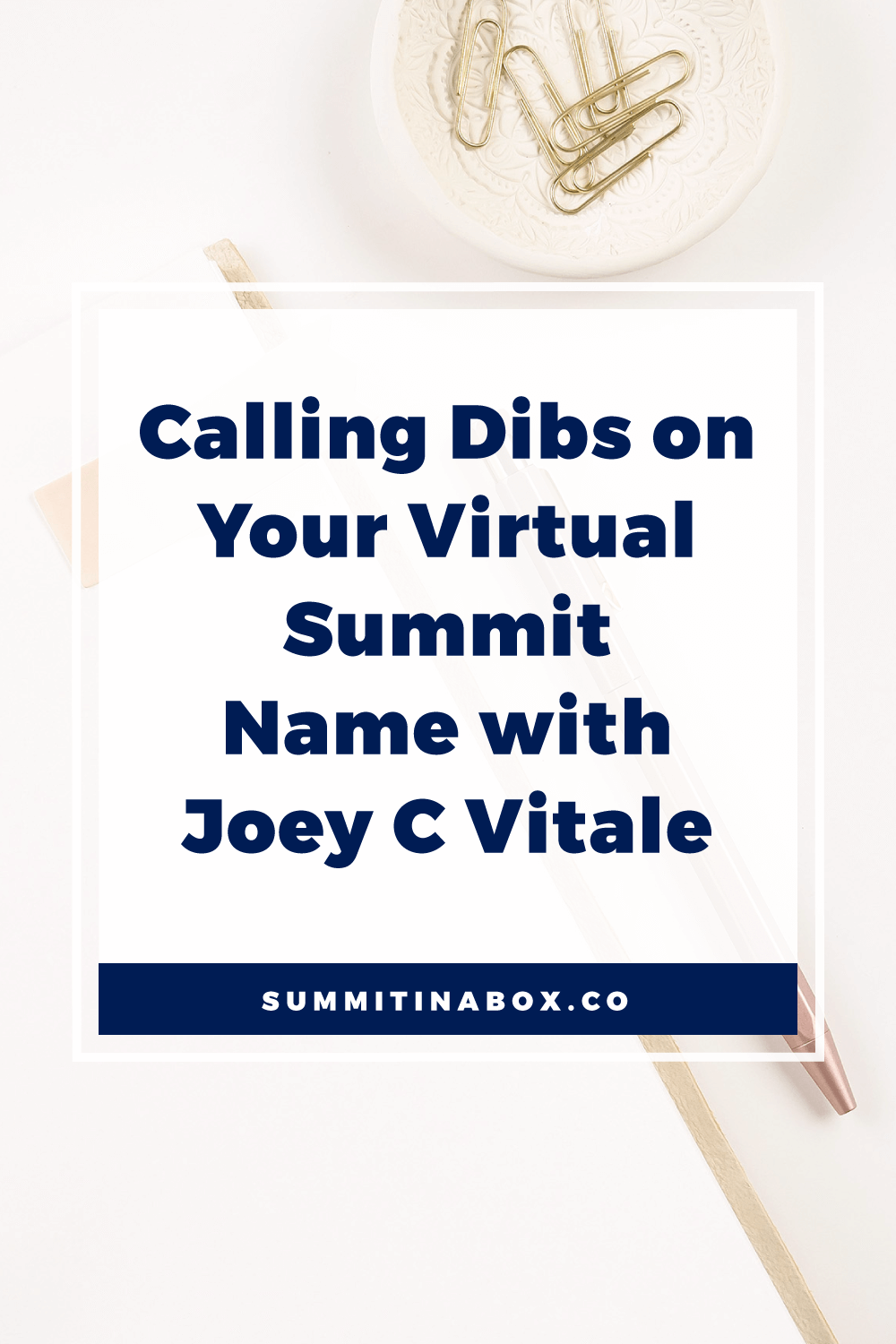