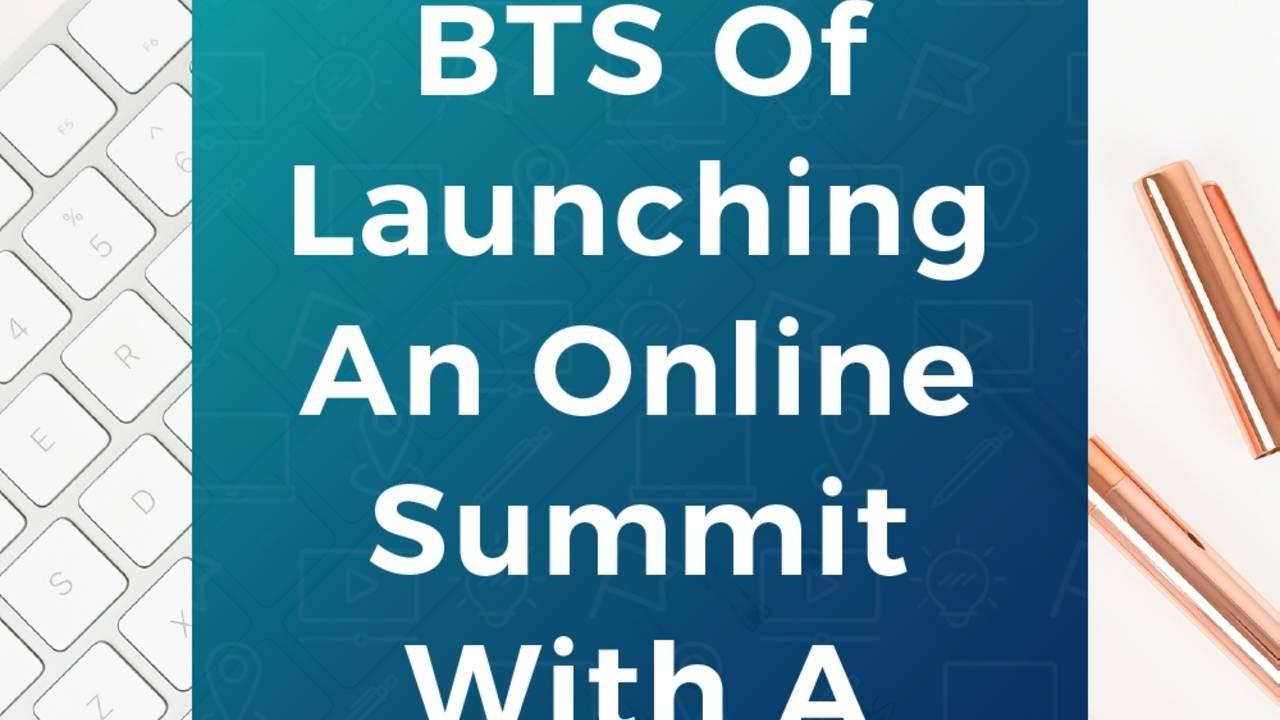 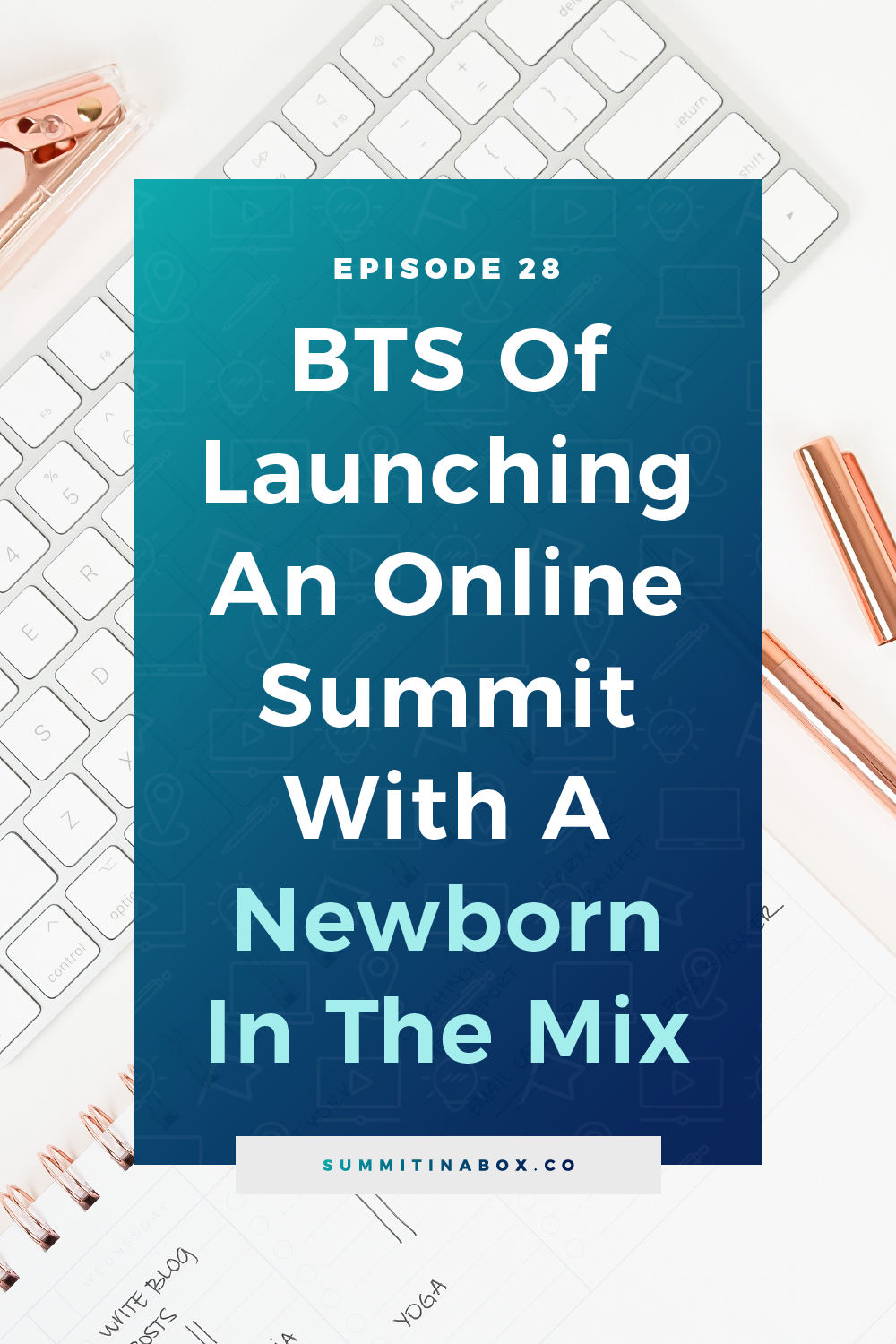 Curious about what it looked like to launch my first summit with a newborn in tow and whether I recommend it?

I'm sharing a behind-the-scenes look at how I launched my summit during the craziest time of my life with a newborn.

Why I Hosted a Summit With a Newborn

Why did I make that decision? The short answer is that I'm pretty much insane when I have an idea. I absolutely go with it and that's exactly what happened. I was expecting my daughter in January 2018 and in late October 2017 just a few months before I decided that I needed to host a summit. It wasn't something I wanted to do. It was something I needed to do.

Now the smart move might have been to get the prep work done and then put the idea on a shelf for later in 2018 when I kind of knew more about how things would be looking with the baby and had time to adjust to my new mom role. But that is of course not what I did. I was really worried about how big of a hit my income would take from taking three months off of a service-based business and I was also really worried that, "Oh my gosh, if I don't get this summit for designers out into the world, someone else is and I need to do it first."

Because of that, I decided I was going to do it as soon as possible to hopefully get the idea out before someone else did and hopefully make some of the money back that I would lose from being on maternity leave. Naturally, I announce my summit the day I came back from maternity leave and hosted it three weeks later.

With that being said, let's go into a general look at the timeline. In late October is when I had the idea and then I used November, December, and the first two weeks of January to hustle like crazy and get it all done. Remember what I've talked about before. I had a hard time finding resources. The strategy, graphics, email marketing, website, All-Access Pass strategy, all of that stuff were all up to me to come up with and create from scratch. I had a full client load as well, but luckily my December client ended up canceling, so I just had my retainer clients and a few small one-off projects to handle, which gave me a lot more time than I would have had otherwise.

I had a little less than three months before I had my daughter to really hustle, get my strategy figured out as much as I could. On January 18th I had my daughter. A couple of weeks later I pitched and finalized my speakers. I will tell you that all of my pitch emails were scheduled and ready to go before I went on maternity leave. Most of that happened automatically. I would pull out my phone every once in a while and respond to questions, but that was all I had to do.

On April 1st a little less than about two and a half months after I had my daughter, my maternity leave ended. And I also announced the summit on that day. Then three weeks later was the first day of the summit. It was definitely crazy. If there wouldn't have been a baby in the mix, that would have been a wonderful timeline with a lot of free space. But I'll talk about this a little later than me and having a newborn didn't exactly go the most smoothly.

How I Did It

But first, let's talk about how I did it really without going insane. I am a very organized person and that really played to my benefit, and it's the only reason I pulled off such a successful event without losing my mind. When I say that I used November, December, and the first two weeks of January to hustle, I did not mess around. I was not sitting at my desk checking Facebook every once in a while going off and working on new projects, all of that stuff. I was working like crazy.

Like we've talked about before, I started with a couple of weeks of research and created my own process with over 340 tasks. Like I don't mess around, but those 340 tasks, even though they sound crazy, are why I was able to do it. And by the way, those are exactly the tasks that are inside of my Summit Host Process Map. But I was able to work backward from my launch date, figuring my time off and see exactly what I needed to be done before I went on maternity leave, which just so happened to be pretty much everything.

I color-coded each task to tell me whether it needed to be done before leave, during leave or after, which always let me get a really quick glance at how progress was going and what I needed to be working on. Of course, I also had my team doing all kinds of stuff like creating graphics and helping with speaker questions while I was away, all of that good stuff.

I had a great support system, which really helped a lot, but by the first week in January, I had most of the prep done. My website was ready, my speaker onboarding material was ready. I had speaker pitches written and scheduled to go out. There were tasks assigned to my designer for all of the graphics that needed to be created. I had welcome videos recorded for the Facebook groups. My presentation was done, email sequences were written, the All-Access Pass was ready minus having the presentations themselves loaded up and the sales page was good to go for it. I had processes written for my team while I was gone. I had a promotion strategy outlined and posts written for my VA to schedule them. I was really done with everything I could do before getting information and presentations from my speakers and this is how I was able to make it happen.

Everything was done and ready to go as much as possible until I needed information from other people. I will say there were a few times during my maternity leave that I had to jump on and make some tweaks or respond to emails, but from what I can remember, and I'll be honest, it was a little fuzzy. It wasn't a lot. I didn't have to jump in and work a lot. When I did come back from maternity leave, it was the same day registration opened up and speaker presentations were due. I threw myself into getting all the finishing touches already from there. And yeah, there were days where I was at my desk bouncing on an exercise ball with my daughter strapped to me in a carrier. There were days I was legit sitting and crying, trying to work while she screamed her head off with a nanny.

It was not easy. But I made it happen and I turned my income goal of $2000 into $16,000 and more than made up for the income I was worried about losing by taking time off.

Do I Recommend It?

With that being said though, do I recommend it? Since so many people saw me posting about my newborn, one minute launching a summit the next, I have gotten all kinds of questions from a lot of expecting moms asking if doing it this way is something I recommend and especially since it's such a good way to get an influx of income after taking time off. My short answer to that question is absolutely not. I do not recommend it. If you want my longer answer, here it is. Yes, it worked for me. I was able to pull it off, but it was not easy. And yes, you can buy my Summit Host Process Map to get the exact process that I used and you can get my Summit Host Vault for all the email scripts, website copy, graphic templates and all of that stuff.

But especially if this is your first child, you have no idea what to expect. I thought I would be itching and able to work while I was on maternity leave. In my mind, I was going to lay low for a couple of weeks and then you know, have a baby on my chest and be working away. But for the first three months of my daughter's life, I had to hold her all day long every day because if we put her down for a nap, she would just scream and we didn't know what to do for the first eight weeks. We held her all night long too. 24/7 one of us was holding her. I also nursed her and our nursing journey was not easy, which really took a physical and emotional toll on me for those first few months. I struggled with postpartum anxiety, which along with postpartum depression is something you don't know if you'll have until after the baby's born, even if it's not your first one.

Most of the time, even in that first couple of weeks back from maternity leave, I was too anxious to even do anything. I would sit at my desk worrying about my daughter, listening to her crying, listening to her even playing. Even during the 10 hours per week when I did have a nanny, working was really, really hard. Because of all that, I really just encourage you to hang tight if you're in the exact situation I was in. Let yourself plan and explore and be excited, but also really give yourself space to one, enjoy your baby without feeling pulled towards working on your summit. But to give yourself space in case it's harder on you than you expected, which is what I went through. I don't want you to feel pressured to jump back in at full force when you might not be ready for it and it might not be the best thing for you.

I mean, yeah, it might not be the best thing for your baby. Mostly your baby's fine but you are the one I'm concerned with here. I really just encourage you to hang tight, do all the planning you can and see how you feel a few weeks into your maternity leave and go from there.

But no matter when you host your summit and what that stage of life looks like for you, go in with a plan. Everything is going to fall into place easier and you're going to be in a more positive mindset and you'll see the results you want or even more than you wanted because of that plan.

If you do want my exact summit hosting process, it's available to you in the Summit Host Process Map, which has over 340 tasks for Asana and Trello along with walkthrough videos to make sure you don't miss any steps or important details and you can learn more and get it for yourself summithosthangout.com/map.

I want you to get really realistic about your timeline and give yourself some grace within that timeline.

Know that your idea and your audience aren't going anywhere. They're going to be there and ready for what you've got when you can get it to them.