Behind the Summit #10: Solutions Over Problems and Data Over Drama 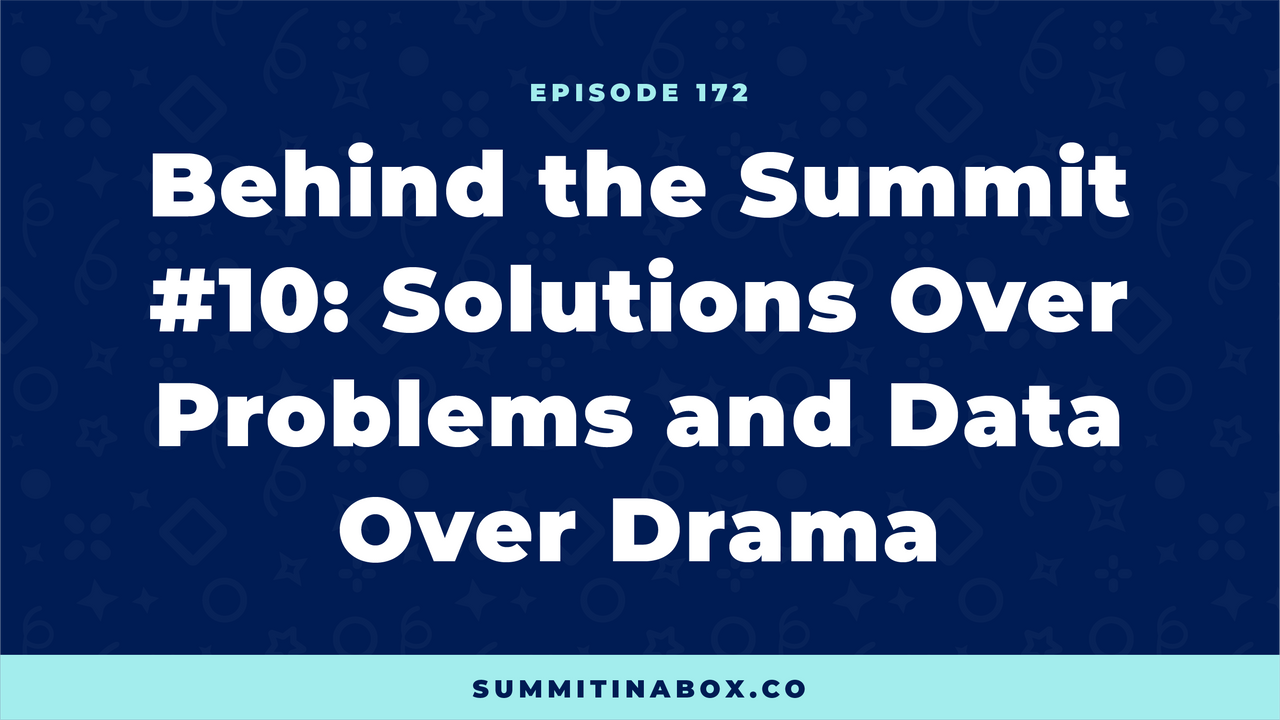 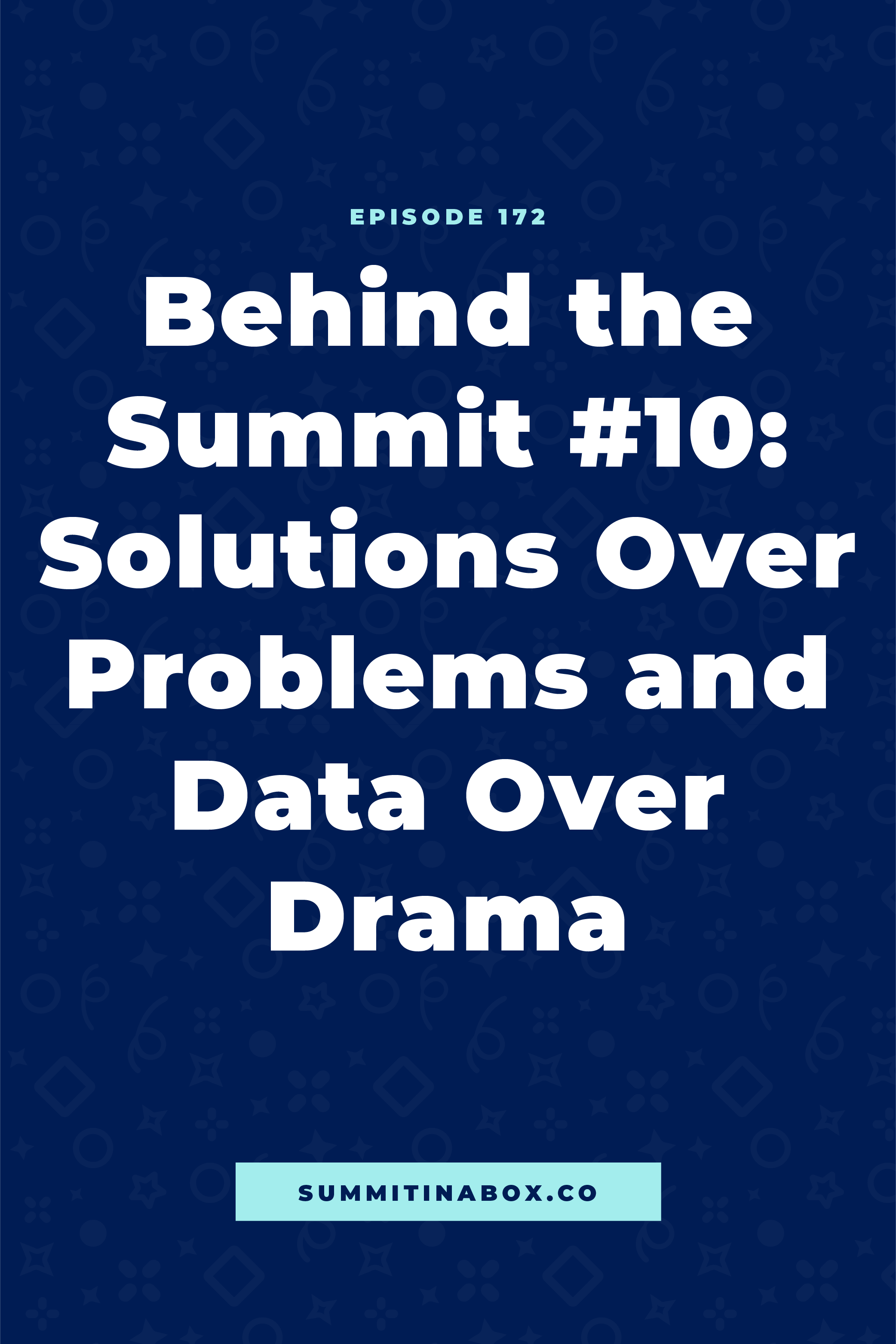 When your summit results aren't looking the way you want, it's easy to focus on the fact that it's not working and go into a downward spiral.

But it's so important to focus on data and solutions instead of drama and problems.

Registration for my summit opened up this week, and the initial numbers are not where I'd like them to be. When I saw that my numbers were lower than expected, I had two choices:

I could have decided that this event was going to bomb, that no one is interested and that I was just going to give up and let whatever happened happen. Instead, I decided to focus on what I can control and the actions I can take.

This week I'm taking you behind the scenes of my first week of summit registration including:

No matter what your initial results are, there is room for improvement, and an opportunity to turn things around if you focus on problems over solutions, and data over drama.

Registration has been open for 4 days, and I’m the only one promoting. Don’t worry! That’s by design. In my mind, the last thing you want is 20+ speakers sending their audiences to your website, only to have something be set up wrong and lose out on a ton of registrations and sales!

I always suggest that you open registration about 5 days before your speakers start to promote as a way to test the process on your own audience. And you’ll hear why that paid off shortly!

Normally I tell my students and clients to have realistic expectations those first couple of days of registration because you’re the only one promoting and the summit is still a way out. The numbers are usually lower when registration first opens because there's no pressure for them to sign up for a few weeks. So if you're numbers seem too low in the first week to hit your goals, don't panic! The numbers will go up when your speakers start promoting and your event gets closer.

Since this is my 6th run of the summit, I had my expectations set pretty high, even though I had not engaged with this audience since the last summit. I was hoping for 300 registrations and $5,000 in sales by now, which is a little bit higher than our numbers from last year at this stage. But that’s not where we’re at right now...

Let’s break down the daily results so far a little bit:

Day one of promotion was a Wednesday. I was awake around 4 am thanks to my 10-month-old, so I had plenty of time in the morning before my first registration email went out. I used that time to unarchive the Facebook group and post an invite to any past attendees to register.

The numbers for day one broke down like this:

Industry standards are about 3-5% conversion rates, so 15% is pretty good. But in my past experiences, I like to see closer to 30% at this stage of registration. Now, I could have pouted about it, but like I tell my students, it’s time to look at the data. Don’t get dramatic about it. Look for solutions. Don’t just sit and look at the problem.

So, I did just that! You might remember back in my initial planning that I had decided to test a longer fast-action timer to give people an hour to purchase the All-Access Pass with the fast-action discount. I quickly decided that had to change back to 20 minutes.

And it paid off. Within an hour of making the change back to a 20 minute timer, we doubled the number of sales so far, with only 28 new people registering - a 37% conversion rate!

This experiment with longer countdown timers didn’t work for my audience doesn’t, but that doesn't mean it won’t work for you. If you go back to our B2C series, you'll remember one of the episodes was about throwing out all the cookie-cutter strategies. It all depends on your audience and positioning, so it could work for you!

By the end of day 1, things had started to pick up as I expected them to. Kate kept an eye on the Facebook group and inbox so I was able to work on other things and check out for the rest of the day.

That leads us up to Day 2! I didn’t really do much related to the summit other than finalize what Day 1 statistics looked like. I won’t lie…When I compared numbers to last year’s Day 1 results, I got a bit of anxiety. I was too busy with other stuff on my to-do list to give solutions much thought, so I didn’t take any summit action. I was pretty down in the dumps about it, but that’s totally normal! The summit emotional rollercoaster is real, no matter how many times you’ve done it.

In the meantime, Kate was going to town in the background! She did things like:

She's a superstar! I’m so glad I have her to do that type of stuff, and if you can outsource summit tasks, I highly recommend it.

We tried a new tech tool

Last year, we used a tool called HelloHostess that would automatically welcome new members into our Facebook group under my welcome video. So, as we approve them, they’d get tagged with 1 of 5 prewritten welcome messages.

It was super handy! However... This tool is apparently no longer a thing.  So this year I sent Kate off to find something new for us. GroupLeads was something I’d heard about, so she got that up and running for us. There’s more we can do with this tool, so I’m excited to look at it when we have the time. But for now, it’s welcoming new people into the group and tagging them as they join.

It’s time for Day 3! That morning, I tracked the numbers for Day 2 and compared them to last year’s numbers. I don't necessarily think that every summit host needs to be in there tracking numbers and comparing with previous summit results every day. I like to track with as much detail as possible though, so I can provide data for my students and find the trends in registrations.

This year, we only had 33 registrations and 4 sales on Day 2. If you're a first time summit host, there is absolutely nothing wrong with those numbers. You can still go on to host a successful event with numbers like this early on in registration. But compared with last years results, this was not where we needed to be to hit the same numbers again this year. It wasn’t a good indication for our final numbers, but I also hadn’t done any promotion that day either.

I made the time on day 3 to go out and look for solutions to see if I could improve our results.

I had to brainstorm possible reasons our conversion might be lower and nothing internally with the summit was much different from last year. So that led me to wonder what was going on externally. I honestly think the biggest issue is the other two designer summits less than a month ago. I now know that if I decide to host this summit again (which I'm not sure I will) I need to change the dates and not host it in March again now that others are hosting similar events in February.

I don’t want to assume that’s the only issue though, and there are still things I can do to improve results at this stage, so I took some action.

Where is all the engagement?

The next issue I decided to tackle on day 3 was our low engagement in the Facebook group. It was literally non-existent and I’ve never had that happen before. My guess is Facebook wasn’t showing the posts to people because I’d just opened the group back up. It’s a hard cycle to break out of because you’re not getting engagement, but you can’t get engagement unless you show up in people’s feeds.

As a solution, I had Kate edit the welcome posts to include a question or way for everyone to start engaging in the group and introduce themselves.

On Monday, I’ll ask my speakers to jump in there and start introducing themselves, and that usually gets things going.

We’re currently up to Day 4 now, which is Saturday. This is the only day I get to work for more than an hour or two at a time, so I dove in a lot more today.

If I hadn’t compared to last year, and this was my first summit, I’d be over the moon with those results. But since I had such great numbers last year, it’s hard not to compare. Today I’ll dive deeper into troubleshooting and solutions, and I keep reminding myself that I'm focusing on solutions and doing what the data tells me to do.

No emotions, only data

I decided that today’s numbers were only data that’d show me what I needed to do today, and I wouldn’t get overly attached to what those numbers were. Since I know we’re going to have a ton of page views coming on Monday when speakers start to promote, I installed Hotjar, which is a heatmap software so you can see what people are doing on your website.

I’ll have Elli look first thing on Monday to see if there are any changes to make to the pages. She’s in Spain, so she’s up super early compared to our time, so I’ll be able to tackle any suggestions before the speakers start to promote. Hopefully she has some ideas!

I decided to look at what’s working well, and oddly enough, our ads are doing really well! They’re far out promoting my email list promotion, and our ads have a 22% conversion rate to sales!

With this new information, I tweaked a few things with Facebook ads.

Now I can easily go in and see if ads are paying off since I’m not launching anything afterward and it makes no sense for me to lose money on ads at this point.

It’s hard not to get wrapped up in the emotional rollercoaster that comes with a virtual summit. Things can feel like they're going great one minute, and then they’re in the dumps the next.  It’s hard to keep a level head and focus on solutions. But that’s where I’m at and next week it’ll all be about supporting the speakers as they start to promote! 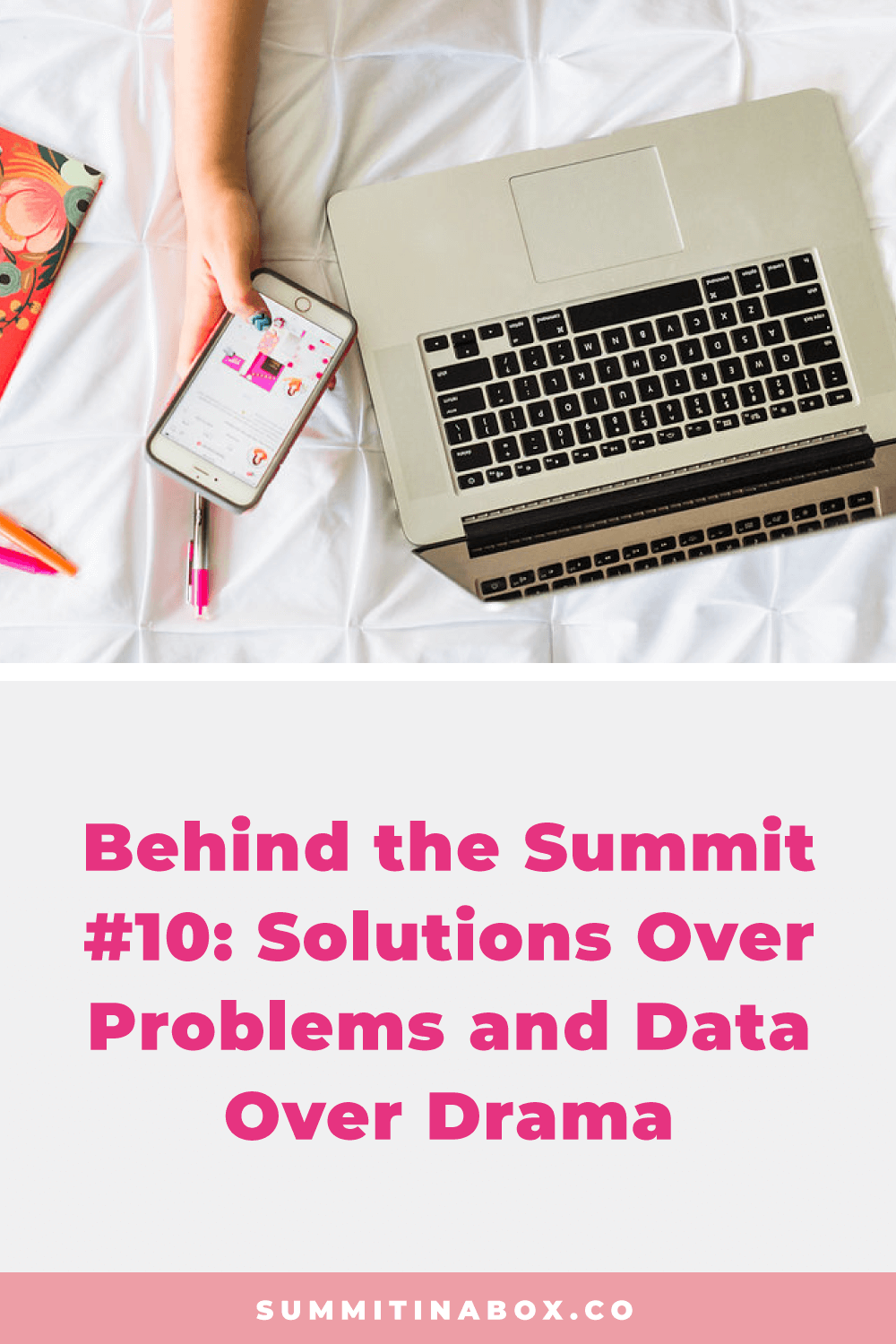 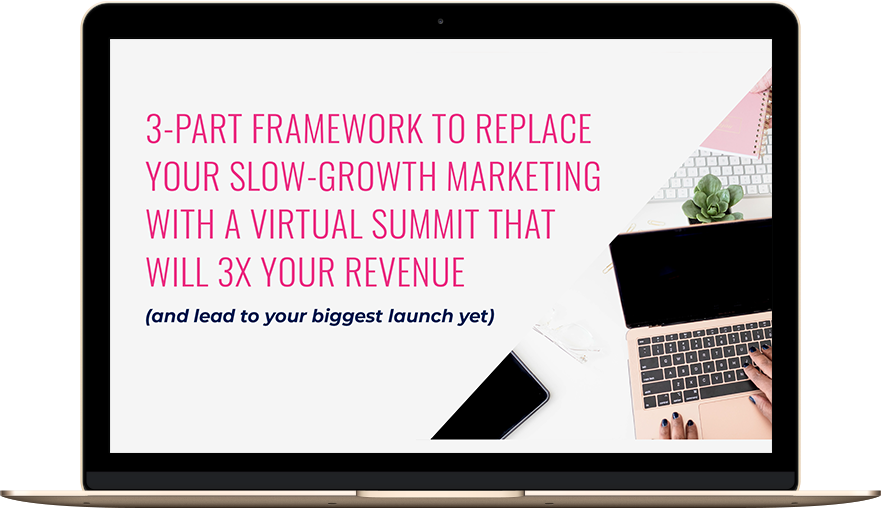 Apply to the Summit in a Box Accelerator for your invite to the advanced private training.