6 Things I Learned About Virtual Summits in 2020 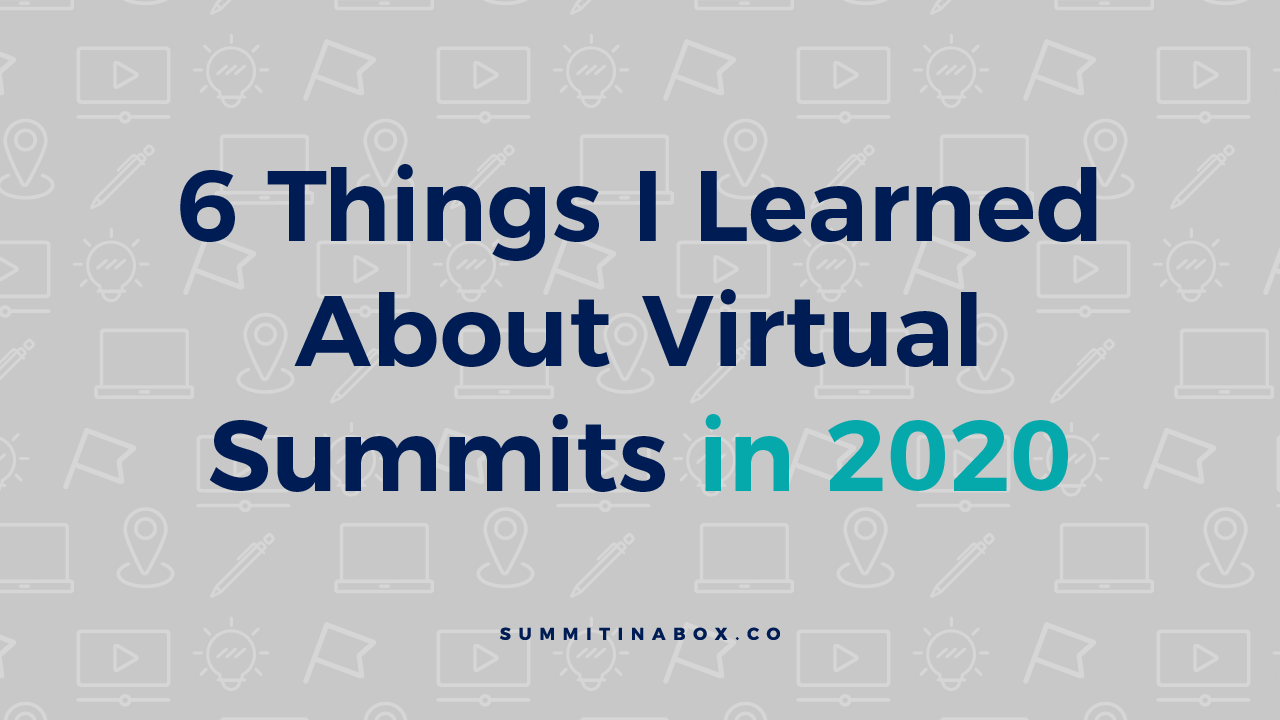 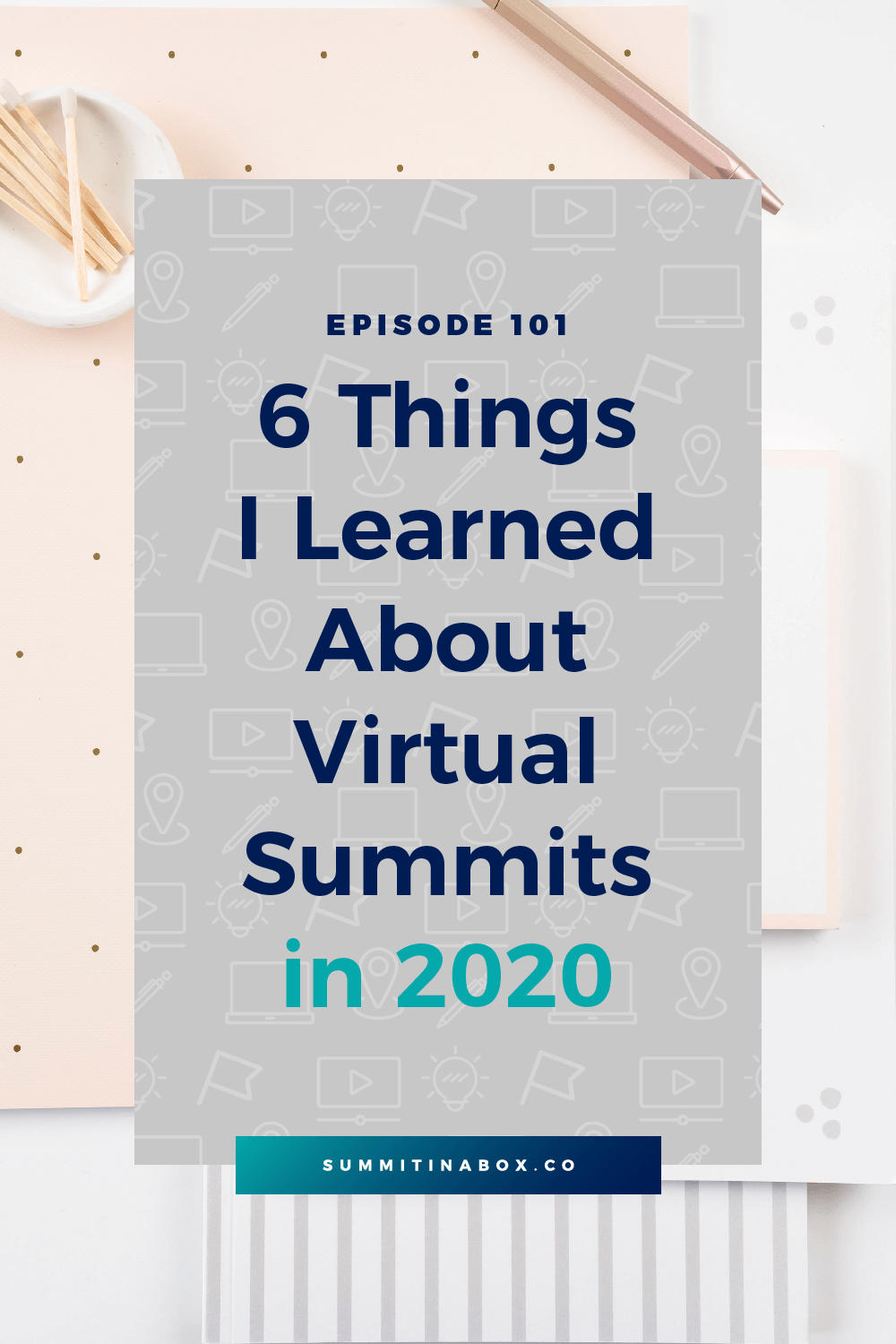 Looking back on 2020 itself is quite the whirlwind, but when I sat down to think specifically about 2020 as it pertains to virtual summits I was pretty blown away at some of the things I’ve learned.

Even though I’m sitting here with over 100 episodes of this podcast recorded, I can’t believe how much I’m still learning and how much I still have to experiment with.

As I was looking back at what I learned this year, I decided that some of the things I realized are worth sharing, so here are 6 of the biggest things I learned about virtual summits over the past year.

What I learned about Virtual Summits in 2020

I'm smiling as I write this, but I warned everybody in June or July not to host their summit about this year's US Presidential Election.

If you're in the Summit Host Hangout, you can look back and see my video on that. But despite warnings, a lot of hosts decided to see what happens and try it anyway.

First of all, if that was you, major props for doing things your way and not letting something that could happen, stand in the way of growing your business. BUT... I know that a lot of hosts who gave it a try around the election found themselves frustrated.

I think the election affected summit results negatively for a few reasons:

If that's you, know that it likely wasn't anything you did wrong. The couple months leading up to the election were extra crazy because everyone (myself included) was trying to sneak in summits and other launches.

The weeks leading up to the election were filled with stress, anxiety, doubts, and distractions. As I'm recording this a couple of weeks later, things still haven't evened out, and I'm still seeing the election have a part to play in things that are going on.

After my third summit, which I hosted in April of 2019, I had the realization that choosing speakers for your summit was more important than I ever thought.

I figured this out when I sorted the speakers for my second summit based on affiliate commissions. I quickly noticed that I paid one speaker $3000 in commissions, several more over $1000, and then many got closer to $100.

What's the difference here? Why am I paying thousands more to some speakers than others?

It was a huge "ah-ha!" moment. The people that I was paying over $1k all had the exact same audience as my summit.

That summit is run for designers, all those people specifically targeted designers. They didn't target creative entrepreneurs or anything broad like that. They had offers for designers.

I didn't host another summit until a year later, so I wasn't able to test that theory until March of 2020. I am still blown away by those results. This year I ditched the comfort aspect. I pitched whoever I wanted to, and I prioritized topics and audience fit, meaning that 90% of my speakers had to have the exact same audience that my summit had.

Holy smokes did that pay off!

That was the only major change I made this year, besides changing to a two-tier all-access pass pricing model. You can get the behind-the-scenes look here, but my number of registrations doubled and my sales nearly tripled. I went from a $22,000 summit to a $60,000 summit.

That tells me that the right speakers, mean everything. Nothing in my messaging changed. We reused our registration page copy, all of our ad copy, promo copy, everything stayed the same. It was the speaker selection process that changed.

If you're having trouble finding speakers with the right audience, let me tell you it is worth it to struggle through figuring that out. If you have to push your summit back a couple of weeks to do it the right way and spend time digging for the right speakers (or maybe shifting what you're going to host your summit about), do that because it is so worth it.

Lesson 3: If you decide it won't work, it probably won't

If you've hosted a summit or you're in the process of doing so, you know that it can get stressful at times. And when you're feeling stressed by the process, that pressure builds and builds until you open the doors to registration and see if it's going to pay off.

A lot of times things might start off slower than you expected, or they'll start off strong and then really quickly taper off for a week or two in the middle of the promotion period.

When I saw that happen for my students in 2020, they handled it in one of two ways:

If you can overcome the self-doubt and focus on solutions and taking action, it will almost always pay off. Especially when you had the foundations right from the beginning.

But if you stay in victim mode, focusing on the problem and feeling sorry for yourself, it's likely that you won't end up seeing the results you wanted.

I saw this over and over with different hosts and it showed me just how powerful mindset is when it comes to hosting a summit.

You have the choice every step of the way to either get down on yourself and focus on problems or to notice a problem and then dive into finding a way around it and working towards a solution.

I think you know what route I want you to take.

This year in September, I hosted my first summit that had a monetary goal of selling a course, rather than making as many all-access pass sales as possible.

But in September, I hosted a summit that was focused on selling my Summit in a Box program for the first time.

It was so eye-opening! I saw the subtle (but somehow also huge) ways you might need to adjust your positioning to do that successfully.

When my co-host for that summit, Jenn, and I were deciding on the positioning of the summit, I didn't feel good about it because I knew that it wasn't going to bring in a lot of registrations and sales: a summit about summits for course creators. The audience was broad and overly marketed to, and we were only talking to people who already knew they wanted to host a summit. I knew it was going to make it so difficult.

Even though I didn't feel good about it as far as registrations and all-access pass sales went, I did think it was going to be a great fit for leading people into my program.

I believe these lower results were largely because of what we talked about before with speakers.

While we could find speakers who specifically targeted course creators, we didn't have anyone who taught course creators about summits. Because of that, speakers didn't promote a whole lot and the people who did weren't as successful as they would have been if they were able to be super targeted.

But...the positioning all paid off with my biggest course launch to date.

When you're thinking about your summit positioning, you might find that there's a tradeoff between the size of the summit itself and the results of whatever type of launch you do afterward.

Lesson #5: There are so Many Long-Term Benefits Beyond Income and Leads

A lot of people go into hosting summits for increased visibility, income, and expert status (myself included).

It's really easy to get caught up in that.

This year I was reminded over and over of the insanely powerful benefits beyond those things. Specifically things like:

Whenever I see someone disappointed that they didn't make bank with their summit, I think of one of my really good friends. She was a first-time summit host, with absolutely no audience and no income from her business.

She hosted a summit as a way to put herself on the map and she broke even with her summit revenue. Honestly, when I heard that, I was a little bummed because it was an incredible event.

But...recently she told me about the other benefits she's seen:

I didn't know her when I agreed to speak, other than knowing that a mutual friend raved about her and that she was a student in Summit in a Box. During the summit, I decided I wanted to learn more about her and support her since she was a student. I tuned into a live video she did in her summit’s Facebook group and was blown away! Instantly I thought, “She's amazing and I want more of what she's all about!”

Since then, I have paid her about $10k in services and digital products. And I'm just one person that discovered her through her summit.

How freaking powerful is that?

If you find yourself caught up in worrying about all-access pass revenue and leads, take some time to think about what other ways this will pay off for you down the road. It's so much more than leads and sales

There is no single strategy that's best for everyone. I run a product with hundreds of students at this point called Summit in a Box. It is my version of a profitable summit, and I will say that it's very effective.

But it's not the only way.

A few months ago, you'd have heard me bashing paid events in our Facebook group. You would have seen me say not to do paid events. I will still say that to a lot of people, but then one of my friends went and ran a paid event that led to over $100k in group program sales after the fact.

While the summit itself was smaller because of the pay upfront aspect that turned some people off, the results were definitely not smaller.

But, that's not going to work for everyone. I'm going to bring her on the podcast soon to talk about who she thinks paid events will and won't work for, but just know that if you want to do something a certain way, and you hear people saying the other way is the way to do it, listen to those who are sharing real experiences, rather than unproven opinions

From there, make the best decision for you and see what happens. It's all an experiment. You can always try something new next time.

I could go on for forever about different takeaways I've had this year, but these were the six that have stuck out the most to me: a little strategy, a little mindset, but all so important.

Now go out and take action to plan, strategize, and launch your profitable online summit! 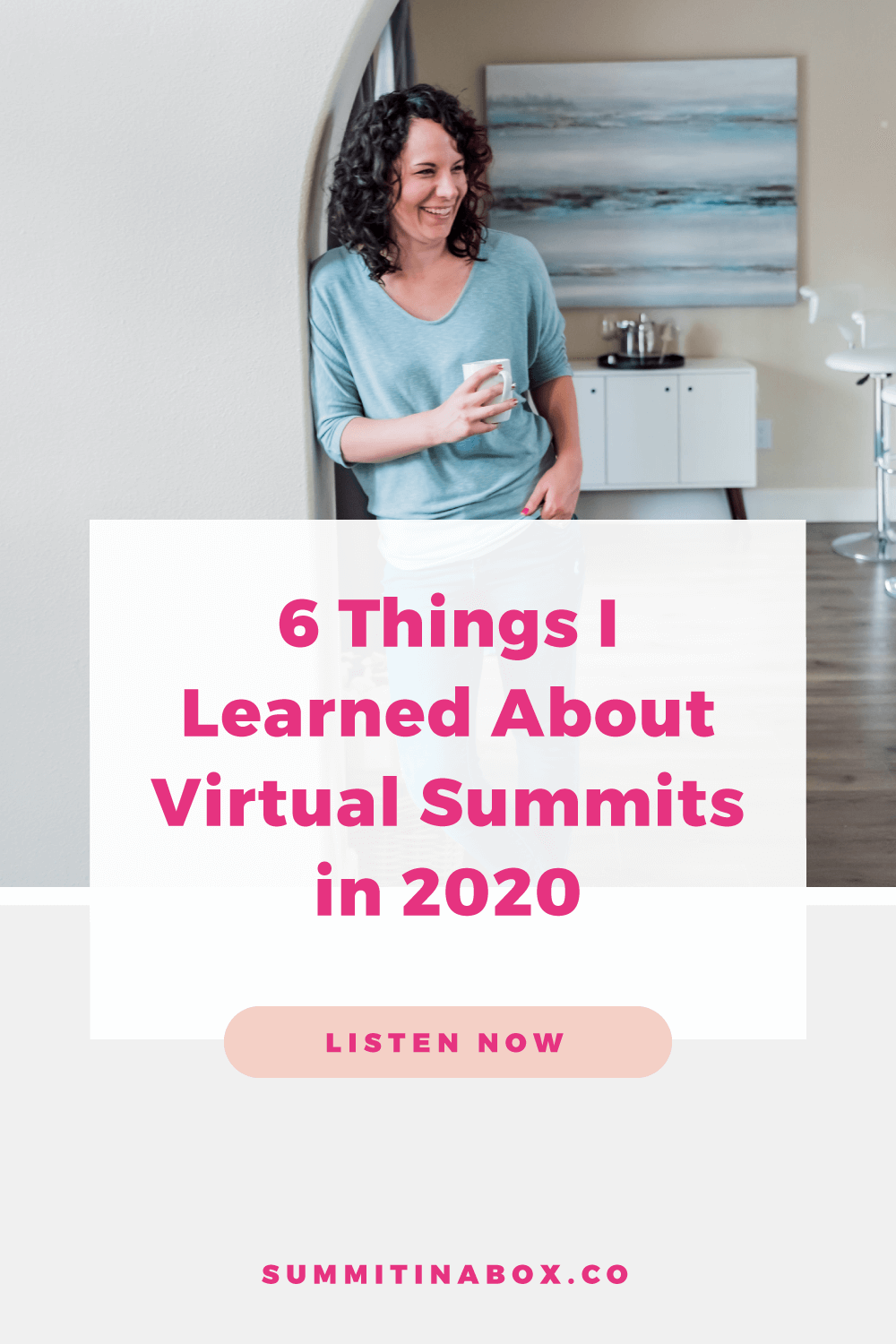